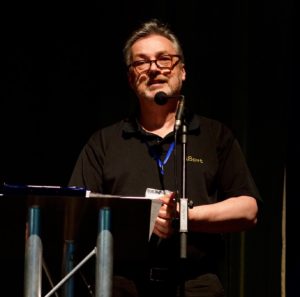 When I created iScot in November 2014 it was as a direct result of satisfying a burning desire to ‘do something’ positive to help in the process of promoting the independence movement.   My background was in manufacturing, I knew absolutely nothing about print media other than the fact that of those journals that I chose to read,  it was self-evident that their editorial line was unashamedly anti-independence.   A new magazine that celebrates Scotland in a positive and aspirational fashion that having read it would render the reader brainwashed into thinking for themselves seemed like a good idea to me.

I was told by friends and colleagues that I’d be lucky to survive beyond 3 issues such is the unpredictably fickle and expensive nature of magazine production. “Print media sales were in rapid decline” they hollered, “ the plethora of free online blogging sites suggests that nobody in their right mind chooses to pay for content anymore.” and they were probably right – but there’s a large number of folks who still source their news from print media.

iScot Magazine launched on St Andrews day 2014 (in digital format) – in excess of 10,000 free downloads augured well for the future, however, our subscription support request resulted in only 82 subscribers. Anyone with a brain would have halted the initiative after issue 1 however, me being thrawn, I wasn’t for giving up. My (then) recently acquired redundancy money and private pension kept the magazine alive. I  wasn’t just involved in the indy movement – I was committed, failure was never an option and with the unwavering support of a business angel we continue to fight for indy as best we can.

With 73 monthly issues under our belt,  it has been an emotional roller coaster of a journey – sleepless nights, cash flow pressures,  health scares, 18-hour shifts – We’re no different from any other small business  ( we’re a team of 2 ) – yet despite our detractors, challenges and every other conceivable barrier to progress – we are still standing…and have even won an award for the best digital magazine by public vote on the Pocketmags platform.

This is where we need your support. Having reviewed our progress and achievements to date, and evaluating actions that need to be put in place to secure our future, we’re reminded of the risks of having such a small production team. We need to address this now as this is a real barrier to growth, and we are entering into IndyRef2 territory soon – it’ll be all hands on deck.

We need to recruit a back-office member to assist with the general admin, as well as a freelance advertising salesperson to help create a stronger revenue stream. As we have no office, it’s our intention to use cloud-based software to create and integrate our subscriber database, giving us the ability to automate as many manual processes as possible – freeing up more time for creative purposes such as our soon to be launched MythBuster/Did you know? series, and funding our iScot Media Hub Tours throughout the country and generally promoting the indy cause to as many undecided folks as humanly possible.

In return for your support, we will have a variety of perks, however, the contents of the perk levels are yet to be confirmed as this all depends on the final funding levels – but we do guarantee that they will be of very high quality and certainly many of the items will be unique to iScot.

Thank you for your ongoing support – we can’t do this without you.

Select a donation amount, or enter your own value to donate monthly, or as a one-off.

Thank you for sending me a print copy of your excellent magazine. Best wishes!

Would like to thank Ken for all his support in supporting Scottish Business. Thanks for giving my business exposure.
Iscot mag is a quality… Read more

Would like to thank Ken for all his support in supporting Scottish Business. Thanks for giving my business exposure.
Iscot mag is a quality read. I look forward every month to it coming through the door .

A wee contribution towards your litigation defence fund...

Finally! I beat Mr Hill! It's not a lot but happy to share some long awaited winnings.

Just catching up with my subscription Ken. Cheers to yerself and the team at iScot.