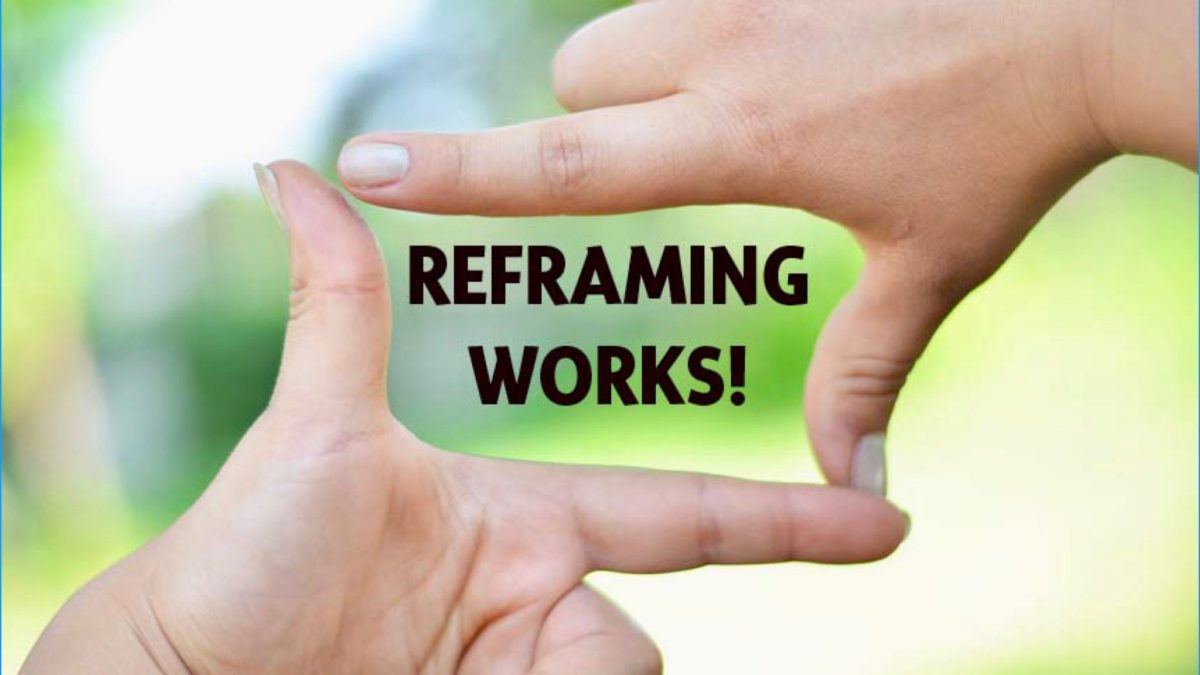 Thanks to the many people who contacted me about the article on reframing. I have had many very interesting questions regarding how to apply reframing in the current political climate. Perhaps it is worth restating some of the fundamental principles of framing and reframing, then we will look at how to apply them and answer some of the most common questions.

One of the first things to remember is that a frame is physical and so gets stronger every time you use it including when you attempt to negate it. As we said before Donald Trump and others have used this tactic successfully in spreading their message by using their opponents’ social media power. Every time the democrats retweeted a Trump tweet they were inadvertently reinforcing his message, though they thought they were rebutting it.

Frames trump facts. This is a fundamental principle which appears to go against our intuition. Surely people are logical? Surely we analyse all the available information before coming to a decision? Surely we are not influenced by who has said something rather than what was said? Actually, the more that we understand about people and how human beings make judgments and decisions, especially decisions under uncertainty, the more we realise that most of the decisions we make are made automatically, by what Nobel Prize-winning psychologist and author Daniel Kahneman refers to as System 1. 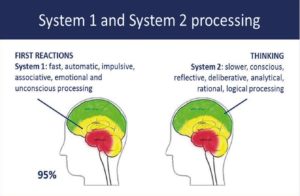 System 1 is a comprehensive set of short-cuts, known in the literature as heuristics, which we use to enable us to function without having to examine every single decision we make in our daily lives. Of course we are in general unaware of the bias introduced by these shortcuts, and research demonstrates that even when we are aware of the potential for bias, we are still influenced by the bias! In the main, however, System 1 serves us well, but it does have several critical drawbacks.

For example, it can give undue emphasis to a factor which is easy to assess, such as how someone is dressed, while ignoring the content of what that person has said. To assess content, we require to use System 2, our logical, analytical personality, and that takes time and effort which means it is reserved for what is considered a really important issue. Our pre-existing Frames provide another source for System 1’s heuristics, which act to prevent us wasting valuable System 2 time and effort on something which has already been decided, in this case by System 1. That System 1 essentially acts as a gatekeeper for System 2 is another reason why people are loath to change their pre-existing frames.

For all of us who were and are crying out for fact check and rebuttal of establishment lies, I share your concern. I understand how you feel, indeed I used to believe that we needed to actively rebut the establishment lies that were spread by the media. What we found however was that frames did indeed trump facts. For example in 2014 we encountered many instances of pensioners being told that they would lose their pension in the event of a yes vote.

We used evidence from the UK government, in particular from the pensions minister, to show official correspondence from the UK government stating categorically that pensions would be safe no matter what the outcome of the referendum. If anything the reaction was to reinforce the belief that pensions were under threat from a yes vote, real life example of what we now know as the BackFire Effect.

Also during the 2014 Referendum, many of us used Daniel Patrick Moynihan’s well-known saying “You are entitled to your own opinions, but you are not entitled to your own facts!” Of course this is true in the hard sciences, such as fundamental physics, but in day to day life, neurology and associated science demonstrate that our perception and yes, our frames, lead us to select our own facts.

These could be radically different from someone else’s selection of “facts”. If you combine this insight with the lessons from Professor Lakoff’s analysis of political morality, you will see it is next to impossible to change someone’s mind by providing more “facts”. The root of disagreement lies with the use of language and its intersection with morality.

This is why we point out to activists that reframing can only be done face-to-face, with a genuine effort to engage with the other person. Now one of the questions that I am always being asked is – but what about leaflets? Surely we need to keep on leafleting people to get our message out? Let’s just think about that for a moment. What exactly do you want to achieve with a leaflet? If you want to provide information and engage your support, then targeting your supporters is not only valid, but essential. So please use leaflets to keep your supporters engaged. But what about potential supporters? Can’t we convince them or at least start them on the road to questioning their views?

To answer this, we need to look at research into how System 1 judges visual information. To increase the chance that your leaflet will at least be scanned, rather than binned immediately, the leaflet needs to be on high-quality paper, with very good, clear layout. Artwork and photographs need to be high-quality (N.B. not overexposed, poorly composed photographs) and of course, the message needs to be clear and simple. In fact, learning from the newspaper industry, if you have a doublesided leaflet with a clear, simple message as a headline, occupying one page, and some backup evidence from a neutral source on the reverse side, then this could plant a seed in the minds of even those who throw it away immediately. Just think for a moment now and be honest with yourself, how many leaflets meet these standards?

How many even have a clear purpose? How many have a clear, simple message? Of course it goes without saying that any literature, both on and off line should ideally reinforce our frames, not establishment ones. For example, as we mentioned before, always refer to NHS Scotland or the Scottish Health Service.

A related question concerns street stalls, under either a YES or party banner, such as SNP or Green. Are these a good idea? Interestingly they are. The main reason is that stalls encourage self-selection. In other words people choose to talk to people on the stall. This gives you an opportunity to engage with them, and by questioning and listening you can qualify them, at least initially. If they are supporters, then make sure that you have something that they can do to help you in the future. If they are potential supporters, then determine what else you need to do to convince them. This is where it helps to have a list of websites that they could visit to check out things for themselves. According to the information you have gained in talking with them, you will probably want to highlight particular sites that would fit with their background and personality, as well as their demographic.

Another question that comes up again and again is what to do on Twitter and Facebook when outrageous claims are made, or the trolls are out in force again. The establishment already controls the media. Do you want to give them social media as well? Did I hear you say “I am smart enough to give a good answer on Facebook or Twitter which then convinces lurkers, people that are not posting on the thread but are watching it”. This has been extensively studied and psychological research shows that a developing argument or a situation where opposing views are batted back and forward polarises opinion. In other words people double down on their existing views and beliefs. If we were in the situation where we had 80% in the polls then this could be a good strategy. We are, however, seeking to persuade people to change, therefore it is not a good idea to reinforce their existing beliefs. This is why the establishment are so keen to promote division on blogs and on diverting information on threads and in the mainstream. Do not play their game. If you are an admin on a blog or group, then consider hiding or blocking posts which are diverting the thread. If you see supporters engaging in argument or even worse, personal abuse, then it is worth helping those people to see that they are doing the opposition’s job for them.

So how do you reframe? How do you counter the lies of the establishment? In the first instance, difficult though it may be, we all need to avoid repeating, using or in particular, denying establishment frames.

Reframing is a skill. Until you have practised responding to other frames so that you intuitively know what to say then it is probably best to think carefully about your responses. Since Reframing is most effective face-to-face, the ability to empathise with the other person, to listen carefully to their concerns and elicit their frames by questioning is of paramount importance. Rather than simply restating your reframe, try turning it into a question. For instance, recently I was talking to someone about Scotland and he questioned whether Scotland was indeed big enough to stand on her own feet. I merely asked him what the maritime area was for Scotland, and after a few moments thought he replied “Oh, I see what you mean, it is much bigger than England’s isn’t it!”

Carolyn Leckie in a recent article in the National described her experience in taking part in an event where everyone sought to engage with the other side by seeking to understand their positions. Demonstrating empathy in such a manner is essential when you are talking to people. As she pointed out, of course there will be some people who will never change, but talking to people without rancour, without a condescending approach, is essential if we are to persuade people to support self-determination.

I hope that I have answered some of the common questions about reframing, but please do keep on sending your queries in, and we will do our best to answer them.

We have just finished making several short films about Reframing, in particular a Q and A with me which will be available to the public and a longer video which will be used in training trainers and activists. I am also scheduled to give talks to activist groups all over Scotland, so look out for information on one in your area.

For those readers interested in volunteering to be a trainer in reframing, please register your interest via the following link: https://tinyurl.com/framingcourse